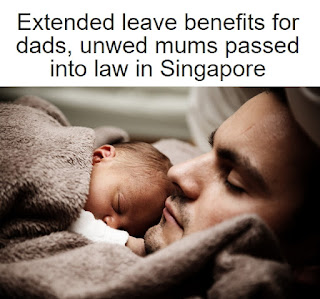 New fathers
Will get two weeks of Government-paid paternity leave.

Shared parental leave
To be increased to four weeks.
This refers to leave taken from the spouse’s maternity leave, if she opts to share it.

Including the six days of childcare leave and one week of unpaid infant care leave that fathers are currently entitled to, the changes bring the number of leave days fathers can take in their child’s first year to up to two months.