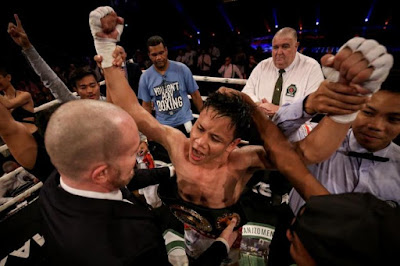 Local professional boxer Muhamad Ridhwan was pushed to the distance in his fight with Namibia's Nataneal Sebastian at the Roar of Singapore III event at the Suntec Convention Centre last night.

The two fighters went the full 12 rounds in their battle for the International Boxing Organization (IBO) International super featherweight title, before the 29-year-old Singaporean got his arm raised in victory after recieving a unanimous decision from the three judges (115-113, 115-113, 115-114).

The win stretched Ridhwan's unbeaten record as a professional to nine and currently ranked 70th in the world, while Sebastian was undefeated in nine fights before the fight with Ridhwan.