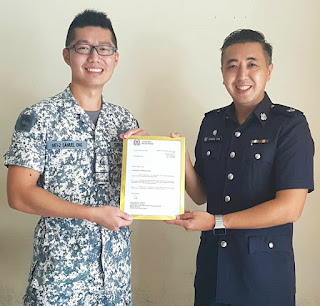 On the 31 October 2017 at about 7.20AM, Mr Samuel Ong, a Singapore Armed Forces serviceman, was on an escalator at Tanah Merah MRT Station when he noticed an 18-year-old man standing closely behind a young lady. As Mr Samuel walked past the man, he saw him holding a mobile phone under the woman’s skirt with the camera facing upwards.

Without hesitation, Mr Samuel immediately confronted the man while he called for the Police. Upon arrival, officers from the Public Transport Security Command and Bedok South NPC made a check on the 18-year-old man and found upskirt videos in his phone. The man was subsequently arrested for Public Nuisance and will also be investigated for taking upskirt photos.