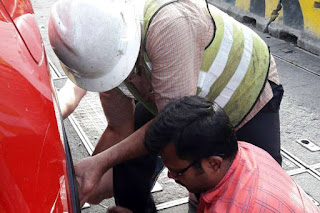 Mr Venkateswaran was not the only good Samaritan on site - another lorry driver, whose name is not known but is believed to be Singaporean, also chipped in to help Mr Christopher Goh.

Wrote Mr Goh on Stomp: "Foreign workers not only contribute significantly to Singapore's economy, but also readily assist anyone in need of help. Thank you!"

A photo of an unnamed man posted on Facebook by Prime Minister Lee Hsien Loong yesterday morning has triggered an outpouring of appreciation for foreign workers.

In his post, Mr Lee said the man looked like a foreign worker calling home on his cellphone, and urged people to appreciate the contributions of migrant labourers here.

These include building housing and transport infrastructure, as well as caring for the young and elderly.
No comments: