Obituary: The man who helped turn Bond into a $7 billion business

Moore was the longest serving Bond, having played the famous spy in seven films. He played a big part in turning the series into one of Hollywood's longest and most valuable franchises. The franchise continues to be one of the industry's biggest money spinners, grossing in excess of $7 billion. "Skyfall," released in 2012, alone made a cool $1.1 billion.

Sir Roger Moore also played Simon Templar in television series The Saint between 1962 and 1969.
No comments: 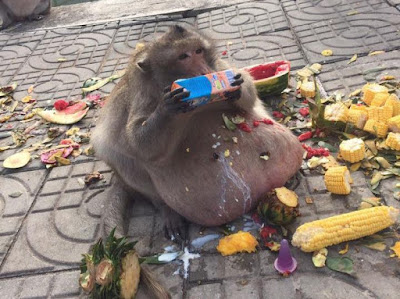 A morbidly obese macaque who lives near a floating market in Thailand is raising eyebrows for his sheer size. At about 33 lbs. (15 kilograms), the chubby monkey, dubbed "Uncle Fatty" by tourists in the park, dwarfs his average-size comrades, who typically weigh about between 13.2 and 15.4 lbs. (6 and 7 kg).

But how exactly did Uncle Fatty get so rotund, and are the causes and consequences of obesity in animals similar to those found in humans?

"Like humans, macaques become obese from consuming excess calories — regardless of the type of food," Patricia Turner, a pathobiologist at the University of Guelph in Canada, who has studied obesity in macaques. told Live Science in an email.

And it turns out that Uncle Fatty isn't alone: As animals that live in association with humans take up the habits of people, the animals too are facing increased rates of obesity and metabolic disease, such as type 2 diabetes, Turner said.

You may be happy to know that this monkey has been rescued and placed in rehab.

His new diet is limited to 14oz of lean protein, fruits and vegetables twice a day.


My 2 cents:
There should be rehab centres for obese Singaporeans, where they are actually doing exercises and eating controlled meals instead of going to doctors to lose weight.

Most men put on weight once they came out from military service. Therefore exercises and controlled meals in the military service are important aspects of controlling one's weight.
No comments: