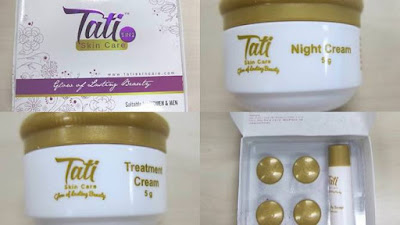 A skincare product sold on various online platforms has been banned for sale in Singapore after authorities found very high levels of mercury as well as prohibited and dangerous ingredients in its contents.

The Tati Skin Care 5 in 1 cosmetic set is touted as being "100 per cent free of harmful chemicals", with claims of having no mercury on its packaging, the Health Sciences Authority (HSA) said in a news release.

The set consists of a day cream, night cream, treatment cream, sunblock and cleanser. HSA tested the products and found that the night cream contained levels of mercury 20,000 times higher than permissable limits - posing a "serious health hazard" to consumers, it said.

Mercury is a toxic substance and is prohibited for use as an ingredient in cosmetic products.

Read more at http://www.channelnewsasia.com/news/singapore/tati-skincare-products-banned-for-mercury-content-20-000-times-8925866
No comments:


PUB said it will roll out a project to help eligible families living in older Housing and Development Board (HDB) flats replace their non-water efficient nine-litre water closets with more water-efficient ones for free.

The project aims to help these families replace water closets, and any non-water efficient washbasin taps and kitchen sink taps, the national water agency said in its press release. With the replacement, households can save up to five litres of water per flush and their water bills could be cut by 10 per cent as a result, it added.

PUB said about 9,000 families currently on community assistance schemes and living in HDB flats built between 1986 and 1992 are expected to benefit from the project. These flats were fitted with nine-litre water closets, which were discontinued in 1992.

Read more at http://www.channelnewsasia.com/news/singapore/residents-in-older-hdb-flats-to-get-more-efficient-toilets-free-8927820
No comments:


Capital 95.8 FM is the only radio station here which offers news bulletins in Chinese dialects. Of the newsreaders, six read in Cantonese, five in Hokkien and five in Teochew, four in Hainanese, three in Hakka and two in Foochow.

These dialect newsreaders view their job as a form of social service.

They read important announcements to their audience so that they can understand them in the language they are most familiar with.

Mr Liang Tian said: "Many people understand Mandarin now, but hearing their dialects on radio gives seniors and listeners a sense of intimacy with their heritage." A 61-year-old ComfortDelGro cab driver was hurt after his taxi overturned in front of SAFRA Tampines on Tuesday (Jun 6).

Video footage of the aftermath shows several passers-by coming to the driver's rescue. Two men are seen carrying the driver from the taxi and one person emerges from the vehicle after helping to free him from the wreckage.

Read more at http://www.channelnewsasia.com/news/singapore/passers-by-help-free-cabbie-from-overturned-taxi-near-safra-8926048
No comments:

Forum: Parents should not interfere with school discipline

The case in which a parent took a school to court for disciplining his errant son is yet another example of parental interference that seeks to subvert the school's authority (Parent sues school over confiscated mobile phone; June 7).

This parent needs to think about the values he is imparting to his child.

What is to stop this parent from bailing his son out over far worse misdemeanours in future?

As with the judicial system, schools impose harsh penalties for a reason - to not only punish the offender but also to serve as a strong deterrent to others.

Maintaining school discipline is essential for order and a conducive learning environment to be established, and also to ensure that the right values and socially acceptable behaviour are cultivated in students.

Kudos to the courts and District Judge Clement Julien Tan for dismissing the parent's claim as "untenable" and for ruling in favour of the school principal, whose responsibility is to oversee student discipline based on regulations.

I hope it also sends an explicit message that the court's time and resources should not be needlessly wasted this way.

If the parent remains unappeased, there is always the option of enrolling his son in another school or even homeschooling him.

Perhaps, the most prudent course of action would simply be to trust the school's efforts in helping the son learn to take responsibility for his actions.

Forum: What kind of values is the boy learning?

I was shocked after reading about the parent who took legal action against a school because it disciplined his son (Parent sues school over confiscated mobile phone; June 7).

Schools are entitled to have their own set of bylaws, rules and standard operating procedures.

The school in question has an explicit rule prohibiting the use of mobile phones during school hours.

Instead of defending the school by chastising his son, the parent takes the school to court over a misdemeanour which his son admitted to committing.

What moral values is the parent imparting to the son, except that if one has the means, it is acceptable to be belligerently disrespectful?

Such a mentality ought to be demolished. Has it not occurred to the father and his legal counsel that this legal pursuit is futile?

Also, if ever such an undeserving case should succeed, such a precedent will serve as a mockery to rules and bylaws.

I am glad District Judge Clement Julien Tan turned down the request for the phone to be returned.

You may want to read another forum letter Don't make things tougher for teachers
No comments: