With two maids in his home, Sean Neo, four, rarely did any household chores.

But his mother, bank officer Deborah Lim, said Sean now washes his own shoes and dishes, and will even ask for more chores.

It happened after his pre-school, PCF Sparkletots Preschool @ Tampines East Block 261, started a project called Chores 4 Charity last month. This is where about 140 children from the pre-school were given the task of raising money by completing household chores at home, or for friends and relatives. This is like the concept of Scouts Day.

In under two months, the children raised more than $3,000.

Ms Lim, 32, who was proud of the initiative, said: "Even though the project is over, Sean still continues to do chores at home. He also learnt about the concept of money."

.. as well as responsibility and sharing.

A relative of mine, being only in her late 30s, was recently diagnosed with an eye disorder by her ophthalmologist. She experienced a condition known as floaters. These are what appear as annoying cobwebs, tiny specks or dots and threads seen "swimming" around in her vision.

According to the eye specialist, floaters are quite common among the adult population here. It is seldom serious in the majority of cases. Floaters and flashing are a natural phenomenon due to the ageing process. It is largely due to age-related degeneration of the vitreous humour within the inner cavity of the eyeball.

Notwithstanding this, floaters together with flashings may be portents of retinal detachment resulting in complete blindness.

In the past, floaters tended to occur among those in their late 40s and beyond. However in recent years, it has become increasingly prevalent among those in their 30s. I accompanied my relative to both the polyclinic as well as a government-restructured hospital. We were startled when we learnt that both the polyclinic general practitioner and the hospital eye specialist themselves also had floaters.

The female GP was in her late 20s and the male ophthalmologist was in his early 30s.

Apart from ageing, there are other causes which may explain this trend.

These days, professionals, managers, executives and technicians are constantly engaged for long hours with work on the computer, which takes a toll on their eyesight. Many are unaware of the harm done to their eyes and do not practise proper eye care, such as taking intermittent breaks.

To further exacerbate the situation, many Singaporeans are also constantly staring at their smartphones, iPads, laptops and other electronic gadgets while commuting on trains, buses and taxis. Many of us also tend to stare at our cellphones in the dark and stay glued to our TV screens late into the evenings.

We need to look seriously at this worrying trend in Singapore. Eye care is imperative to a healthy population.

While many of us cannot prevent certain conditions like eye floaters, the least we can do is attempt to delay their onset.

Who says a 51-year-old can't look like this? - in Chinese 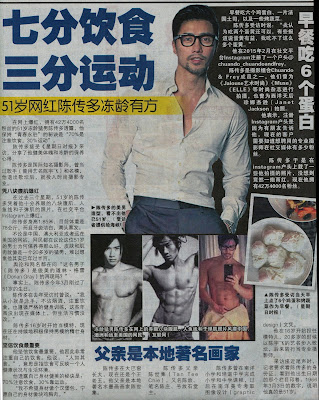