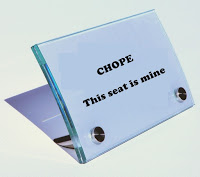 Ms Inderjit Kaur's suggestion that foodcourt patrons ignore the objects placed by others to "chope" seats is not only impractical, but could also be interpreted as a provocative act that could lead to volatile situations between diners (Don't put up with 'choping'; Aug 26).

Visit a foodcourt during peak lunch and dinner hours, and one can be wandering around with a tray of hot food and not find a seat, which explains why people use items to reserve seats.

The solution is not to encourage confrontation but to cultivate civic-mindedness and table sharing.

Hong Kong is much more densely populated than Singapore, but people there have learnt that sharing a table is mandatory and a single diner occupying one table alone is unacceptable.

It may not be comfortable having to eat at the same table with several strangers, but it's a matter of getting used to such a practice. I think nothing of it when visiting Hong Kong.

Ignoring or removing items placed by others to reserve their seats does not foster the kind of gracious society we try so hard to build.

However, if such a measure is deemed necessary to compel table sharing, at least at the start, then perhaps the foodcourt staff should do that, not the customers themselves.

Foodcourt operators should also encourage diners to eat and go, instead of hogging a table for longer than necessary.

Those who wish to linger and chat can be politely persuaded by foodcourt staff to patronise other establishments designed for customers to do so.

The leg cramps suffered by Mr Andy Teo, 48, while running marathons went away, while Mr Alex Lau, 43, was able to quit smoking - all because of this mind-body practice.

Mr Teo no longer suffers from cramps, and just one hour of yoga a week is enough to keep them away. There were other benefits. Yoga helped the 1.8m-tall man stop hunching and to stand straight, and it strengthened his shoulder joints, which were prone to dislocation.

They are among the increasing number of men in Singapore who are turning to yoga for health and fitness, although it is a realm still mainly inhabited by women.

Republic of Singapore Air Force (RSAF) weapons systems officer Chia Chi Yu, 32, planned and led a multinational team in a simulated mission in a two-week exercise in Nevada, US. The mission was to take out a ground target in enemy territory, while fending off adversarial air forces and threats on the ground.

The exercise involved 70 of the most advanced fighter jets in the world, such as the US Air Force's (USAF) F-22s and Royal Saudi Air Force's Eurofighter Typhoons.

Mr Chia was recognised as the top performer out of 19 mission commanders as he was named the Overall Outstanding Mission Commander at this year's Exercise Red Flag - Nellis, hosted by the USAF from Aug 14 to last Friday.


The Singapore team was also recognised as the Outstanding Aircraft Maintenance Unit at the exercise at Nellis Air Force Base. The Singapore detachment deployed eight F-15SG fighter aircraft and more than 100 personnel.

Correct portion of food to eat is in your hands

While some feel like they should eat until they are full, this is not the case. because over-eating until you get that full feeling can leave you sluggish, uncomfortable and lacking in energy.

According to personal trainer and fitness guru, Belinda Norton-Smith,'Our best gauge is actually on our body and it's our hands.

'When we clasp our hands together, it shows us the exact amount of food we should be eating for every single meal, up to 6 times per day.'