In a press release, NTU said the scientists have developed a patch which delivers drugs that are known to turn energy-storing white fat into energy-burning brown fat, via micro-needles.

NTU said the patch reduced weight gain in mice on a high fat diet and their fat mass by more than 30% over four weeks.

NTU said the new type of skin patch contains hundreds of micro-needles, each thinner than a human hair, which are loaded with the drug Beta-3 adrenergic receptor agonist or another drug called thyroid hormone T3.


The palm-fringed Kuta beach in Bali has long been a favourite with tourists seeking sun and surf, but nowadays its golden shoreline is disappearing under a mountain of garbage.

Plastic straws and food packaging are strewn between sunbathers, while surfers bobbing behind the waves dodge waste flushed out from rivers or brought in by swirling currents.

Indonesia is the world's second biggest contributor to marine debris after China.

Forum: Cut down on announcements at MRT stations and in trains too 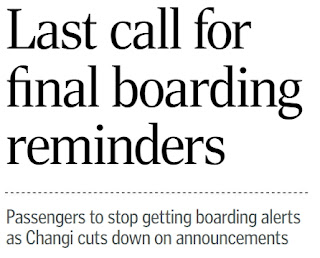 Airport's move to make the airport a more quiet and pleasant place (Changi Airport to end final boarding announcements; Dec 27) is a good one that SMRT and SBS Transit should follow.

There are far too many announcements at MRT stations and in trains.

Almost all passengers do not pay heed to these announcements, as they are far too busy with their mobile phones.

Like Changi Airport, the train operators should make announcements only when there is an urgent need to do so.

Without the frequent announcements at MRT stations and in trains, passengers can enjoy a quieter ride and even talk to their friends without interruption.