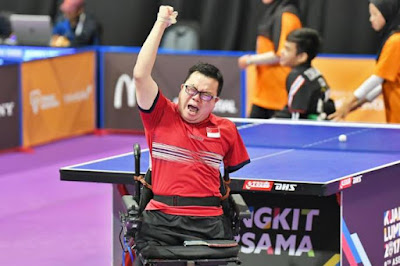 For his sheer will and determination, para-table tennis player Jason Chee was named the 2017 Straits Times Athlete of the Year yesterday in a ceremony at the Mandarin Orchard Singapore hotel.

The 35-year-old navy regular, who lost both legs, his left arm and three fingers on his right hand in a naval accident in 2012, won a gold medal in the men's singles Class 2 event at last year's Asean Para Games just four months after losing his right eye to cancer.