Menuhin Competition is the world’s most prestigious violin competition, held once every 2 years. The winners for this year's competition are Chloe Chua from Singapore and Christian Li from Australia. 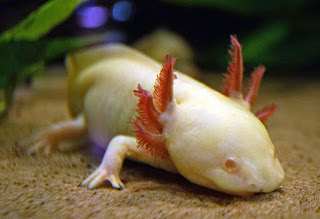 The axolotl, or Mexican salamander has the astonishing ability to regenerate limbs and even spinal cord if it has been injured.

But now a new study by the University of Minnesota in the US has discovered how the animals achieve the feat.

When an axolotl suffers a spinal cord injury, nearby cells called glial cells begin proliferating rapidly, repositioning themselves to rebuild the connections between nerves and reconnect the injured spinal cord.

By contrast, when a human suffers a spinal cord injury, the glial cells form scar tissue, which blocks nerves from ever reconnecting with each other.

A recent study has offered new hope for the diabetic patient with slow-healing wounds.


The Yale University research uncovered the role of a particular protein in maintaining the wounds and suggested that reversing its effects could help aid wound healing in patients with diabetes.

"We discovered that a specific protein, thrombospondin-2 (TSP2), is elevated in wounds of patients with diabetes as well as in animal models of diabetes," said Britta Kunkemoeller. "To determine whether TSP2 contributes to delayed wound healing, we genetically removed TSP2 from a mouse model of diabetes and observed improved wound healing. Our study shows that TSP2 could be a target for a specific therapy for diabetic wounds."

Forum: An insult to compare busking with begging

To conflate begging and busking is to paint a condescending view of busking (Do not allow busking as a day job, by Miss Susan Tan; April 17).

Miss Tan seems to have confused the idea of an income that comes with the time and effort spent in performing and the subsequent appreciation of such efforts with the idea of busking as a sole money-making activity.

I refer to the article, "Popular street performers with a regular following" (ST Online; March 8, 2015), where we see instances of people giving money to buskers out of appreciation, as well as the passion of performing on the buskers' part.

I do agree with Miss Tan that busking should be used to cultivate a vibrant art culture in Singapore.

However, if she really is pushing for this notion of "vibrancy" in art culture, her idea of allowing only locals to perform while excluding others, like foreigners, seems to be a contradiction.

Her assertion that foreigners would be encouraged to "come to our shores to earn an income via busking" makes one wonder whether Singaporeans are such big tippers that foreigners will come all the way to this little red dot to busk.