Exercise programme for senior citizens to be expanded 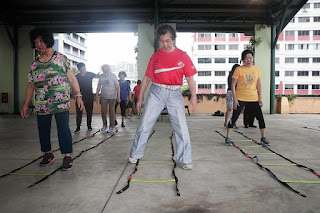 A physical exercise programme that has helped frail senior citizens improve their mental well-being, memory, functional ability and strength is to be expanded across Singapore.

The Healthy Ageing Promotion Programme For You (Happy) will be extended from 37 sites - such as senior activity centres and void decks - to 130 over the next three years.

Researchers studied 115 people aged 60 and over who were frail or had underlying memory issues and found that after taking part in the programme, more than half had become less frail while 70% had improved walking speed, balance and could stand up from a chair more easily.

Nearly three-quarters of them (74%) also had better memory scores, and 40% had become less depressed. The number of falls was also reduced by 40%.


The Singapore Food Agency (SFA) has ordered an importer here to recall a particular type of goat cheese from France.

Two batches of “Crottin De Pays” goat cheese were found to have a high count of Escherichia coli (E coli) bacteria, and the European Commission Rapid Alert System for Food and Feed has issued a notification for it to be recalled.  The Crottin De Pays cheese being recalled is made from unpasteurised goat’s milk.

In a media statement on Tuesday (July 9), SFA said that the batches of goat cheese have not been distributed to the market for sale and are stored in the importer’s warehouse.

A father has shared his grief over finding out the cause of his son’s unexpected death, taking to Facebook to warn others of the widely available ingredient that killed 21-year-old Lachlan Foote a day before his birthday.

After celebrating New Year’s Eve, Mr Foote arrived home and made a protein shake before messaging his friends complaining of the taste.

On Sunday, Mr Foote announced on Facebook the family had finally received the corner’s report confirming the cause of death and hoped that it would serve as an end to the rumours. “He died of ‘caffeine toxicity’,” Mr Foote wrote.

Pure caffeine powder is widely available and sold as a dietary supplement, with one teaspoon equivalent to up to 50 cups of coffee and it can kill.


A coroner has issued a metal straw warning after a woman fell onto one, impaling her eye and causing a deadly traumatic brain injury.

Elena Struthers-Gardner, a retired jockey, was walking in her kitchen in Dorset, England, holding a mason-jar drinking glass with a screw-top lid when she collapsed. According to The Telegraph, the eco-friendly, 10-inch long stainless steel straw entered the 60-year-old's left eye socket and pierced her brain.

"I just feel that in the hands of mobility-challenged people like Elena or children, or even able-bodied people losing their footing, these things are so long and very strong," Mandy said. "Even if they don't end a life they can be very dangerous."