Here are the 5 habits for living a longer life:

The list for avoiding Alzheimer's and dementia is similar:

Plants are being killed by plastic from the 4.5 TRILLION cigarette butts discarded each year 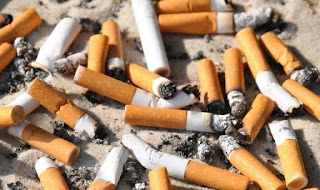 Cigarettes not only harm humans, but they are killing our plants and grasses too.

Cigarette butts, dropped in their trillions every year around the globe, stop plants from growing, a team of experts found.

'Fag ends' are the most littered item, with people dropping around 4.5 trillion of them globally and they can take more than a decade to break down.

The study found 10% less grass appeared - a result usually only seen in lawns and parks suffering from drought.

Experts believe chemicals used to make plastic cigarette filters cause plants stress in much the same way as a lack of water. Plants exposed to butts also had shorter stems and fewer roots.

It has long been known that the highly effective acne medication isotretinoin - marketed as Accutane and Roaccutane - is tied to the risk of severe birth defects. But even with a special program in place to prevent conception in women taking the drug, each year two to three hundred women in the U.S. become pregnant while taking it, a new study shows.

The program, dubbed iPLEDGE, which was started in 2006 by the Food and Drug Administration, requires women who want a prescription for isotretinoin to use birth control or promise to abstain from intercourse and to take a pregnancy test before starting the drug and every month thereafter.

While the program may have reduced the number of pregnancies in women who take the drug, the number hasn't been reduced to zero, according to the study published in JAMA Dermatology.

Faster and easier application process for Lasting Power of Attorney from August, 2019

From Aug 1, 2019, those who wish to apply for a Lasting Power of Attorney (LPA) will be able to do so more quickly, under new changes announced on Saturday (Jul 20).

An LPA allows an appointed person to make medical and financial decisions on another person's behalf should they lose mental capacity.

As part of the new changes, the mandatory waiting period before an LPA can be registered will be halved from the current six weeks to three. An online portal will also be set up from Aug 1, to allow people to access their registered LPA electronically.

"This reduces the overall time required to make an LPA, but it is also sufficiently long for relevant parties to be informed that an LPA has been filed, and to withdraw it if necessary," said Minister for Social and Family Development Desmond Lee.