In a flash, Mr Mohamed Ferdaus Mohamed Yusoff bolted up a moving escalator at an MRT station to grab hold of a little boy hanging off its side.

The SBS Transit employee hauled him over the handrail, but lost his balance and fell on the steps of the moving escalator, hurting his knee.

But he managed to hold the boy tight and hit the emergency stop button.

The six-second rescue drama that saved the boy from a 5m fall took place at Sixth Avenue MRT station on Tuesday at about 6.40pm.

Forum: Parents with strollers can tap in from rear door of bus

The Land Transport Authority (LTA) updated its guidelines in June following the Family Friendly Transport Advisory Panel's recommendations in April last year. We have also communicated this to our four public bus operators. Under this change, commuters with open strollers are allowed to board and tap in from the rear door of buses.

LTA is also installing stroller restraint devices across our entire bus fleet. These devices, which are installed in the wheelchair bay, allow parents to safely secure their open strollers on buses. About 70 per cent of the bus fleet have had these devices installed.

We would like to thank Mr Long for his feedback and timely reminder. We will continue to work closely with our public bus operators to remind bus captains to allow commuters to board with open strollers on our public buses, whether from the front or rear door, and to extend the necessary assistance.

About 930,000 Singaporean households living in Housing Board flats will receive the next instalment of the GST Voucher — Utilities-Save (U-Save) rebate in October, the Ministry of Finance announced on Wednesday (Oct 2).

The rebate, which is part of the permanent GST Voucher scheme, is distributed every three months. It helps households offset part of their utilities bills and lowers their expenses, the ministry said.

Low blood pressure could be a culprit in dementia, studies suggest

Decline in brain function often occurs as people age. People often worry that declining brain function is an inevitable part of growing old and will lead to dementia, but it is not. Many people do not experience age-related cognitive decline.

Clinical studies that have followed older individuals over many years have consistently demonstrated that chronically low blood pressure increases the risk of age-related cognitive decline. For example, a study published in 2017 followed more than 24,000 people for up to 27 years. This study showed that low blood pressure is a significant predictor of cognitive decline and the probability of developing dementia. This was independent of age, gender, weight, cardiovascular, kidney or diabetic status.

Low blood pressure is associated with decreased blood flow to the brain when an individual is sitting or standing. Many researchers have come to believe that insufficient brain blood flow plays a critical role in the development of dementia, Alzheimer’s and perhaps even Parkinson’s disease. Some believe that it may even play the primary role.


The soleus muscles, specialized muscles in the middle of your lower legs, are responsible for pumping blood back up to the heart. Over the last decade, our research team has demonstrated how the soleus muscles plays a critical role in maintaining normal blood pressure during sedentary activities.


My 2 cents:
Scientists have claimed lack of exercise is one of the reasons for cognitive decline. The above article gives more proof for this claim. Blood is not circulated back from the legs normally if one has weak leg muscles. So, please everyone. Do yourself a great favour by doing exercise(s) to strengthen your leg muscles.

You do not have to do your exercises in a gym or outdoor, you can do simple exercises indoor like running on the spot, jumping and skipping for a few minutes daily.  These exercises can also strengthen your heart muscles.
No comments:

Sciatica common, tied to other conditions in older US adults 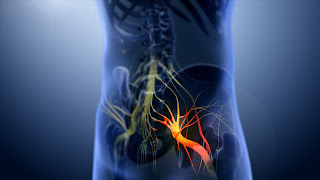 One in four older Americans has experienced the sharp, sometimes disabling, pain of sciatica, and these older adults are more prone to have other illnesses and lowered quality of life, a new U.S. study suggests.

Based on surveys of more than 1 million men and women, researchers found that about one quarter had been diagnosed with this common form of back pain that usually begins in the spine and radiates down the leg.

Compared to people without a history of sciatica, those with the condition tended to have higher rates of other physical ailments and depression, researchers note in the Journal of the American Academy of Orthopaedic Surgeons.


My 2 cents
I used to have pinched nerve which has sciatica symptoms and sharp pain in the feet. It is not the end of the world if one has sciatica but it will be the end (as described above) if it is not treated. My advice is to do a lot of stretching on your legs and lower back and to consult a chiropractor.

A chiropractor is one who re-adjusts your skeleton back to normal. Any pain that has to do with nerves and tendons is best not to consult a medical doctor but instead get the doctor to send you for physiotherapy.
No comments: Parents who lie to their children out of convenience may be doing more harm than good, leading their offspring to lie more to them once they become adults.

While parenting by lying can seem to save time, a new study led by Nanyang Technological University (NTU) showed that lies intended to get children to behave may have lasting effects on their young minds.

The study found that adults who reported being lied to more as children were also more likely to report lying to their parents as adults.

The study, which polled 379 Singaporean young adults using a series of online questionnaires, also showed that these children were more at risk of developing problems that society frowns upon, such as aggression, rule-breaking and intrusive behaviours, NTU said in a media release on Wednesday (Oct 2).